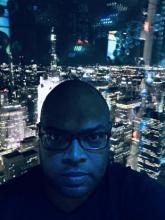 Bernard Pearce is a Louisiana native, born in the rural community of St. Martin Parish. He attended St. John's College in Santa Fe, New Mexico and returned to Louisiana to pursue a life immersed in music and art. He has owned and operated several music and arts venues in Lafayette, Louisiana. Bernard has recorded and released two full-length recordings with his band One Man Machine and has toured internationally with this group. He has participated in a residency sponsored and organized by The Lower Manhattan Cultural Council in New York City. Bernard was also a featured reader at the infamous Allen Ginsberg memorial June of 1998 in NYC. He has recently published a collection of poems, photos, and visual art entitled The Deed to My Bones and followed up with an additional collection entitled, “General Studies.” Over the years he has become increasingly more interested in opera as an art form, as it combines so many different aspects of creative disciplines. His interest led him to attend several performances of the Santa Fe and Metropolitan Operas, and eventually to join the Caravan Stage Company, where for three years he immersed himself in every aspect of producing modern opera. Pearce is currently pursuing his MFA in creative writing at the University of New Orleans.

1/5/23: Deadline for submission of proposals

This site uses cookies. By continuing to browse the site you are agreeing to our use of cookies.